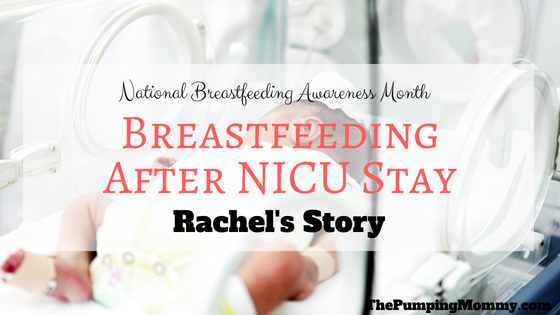 There are often circumstances that are outside of our control when it comes to pregnancy, birth, and breastfeeding. These issues that arise can reshape the way we always picture our breastfeeding journey would play out.

A baby born too early or ill is one of those circumstances.

Being premature or born with health issues can greatly affect a baby’s ability to breastfeed efficiently. Baby’s are often fed via bottle or other methods in the NICU, making latching to the breast difficult.

Getting the hang of breastfeeding after a NICU stay can take some time and practice.

In today’s guest post, Rachel shares her story of how breastfeeding her first baby went smoothly even while having to pump at work, but she learned that circumstances can be very different the second time around!

I have two separate journeys with breastfeeding, one that ended over two years ago and another that is just beginning!

I just assumed that I would be able to breastfeed, and while I do attribute some of that confidence to my success, I also totally acknowledge it pretty presumptuous.

I just assumed that I would be able to breastfeed…

She had some issues with staying latched correctly, and being a first-time mom I had no idea we were doing it wrong at first. She ended up with low blood sugar, but luckily I only had to pump once and after meeting with a lactation consultant we figured out our groove.

After a normal hospital stay, we headed home and the day after my milk came in.

I remember clearly her nursing so well that morning, but then she suddenly only nursed for five seconds at a time for the rest of the day! I was freaking out, thinking that she just wasn’t eating, and I was so engorged it wasn’t even funny.

That day was the hardest I’ve ever had in my breastfeeding journey.

That day was the hardest I’ve ever had in my breastfeeding journey.

I was crying, she was crying, we were both a mess. I called the hospital lactation consultant, she didn’t seem concerned at all, which of course made me feel even more defeated.

Now I look back on it and I know my daughter had gotten her belly very full, and she probably was getting enough sucking a little bit at a time frequently for the rest of the day. In the moment, however, it was so hard to be rational and just trust that she was ok.

After getting over that hump, nursing was a breeze for us! Pumping when I went back to work on the other hand was not.

I was working a full-time job that thankfully I could easily take pump breaks whenever I needed.  But as she got older it was very hard to pump enough to keep up with what she needed.

But as she got older it was very hard to pump enough to keep up with what she needed.

I would find myself pumping at night and in the morning to make sure she had enough milk for the next day.

It was a constant worry in the back of my mind throughout the day. Did I pump enough? It was exhausting, and stressful but ultimately so worth it!

Around 13 months we officially ended nursing.

Honestly, I was so relieved to not have to pump anymore, but the night time feedings were something that I did find myself missing afterward.

Now I’ve started a new breastfeeding journey with my son who is currently just a month old. It has been easier and harder than my first all at the same time.

My son decided he’d make his grand entrance into the world a little over 4 weeks early. He had issues breathing and ended up in the NICU for a week long stay.

The first week of his life was a whirlwind of prayers, crying, and pumping. After talking to the doctors and doing my own research I decided to not push nursing too terribly much while he was in the NICU. The quickest way to get him home would be to do bottles now then try transitioning to breastfeeding.

The first five days of his life he got his milk mainly from a tube, then he slowly started taking bottles. Every small victory I celebrated and every set back shattered me to pieces.

Every small victory I celebrated and every set back shattered me to pieces.

While he was in the NICU I pumped every three hours.

My supply was great, but that also meant I had way more milk than he needed. I ended up with more clogged ducts and close calls with mastitis than I can count in the first couple of weeks.

Switching from bottle to breast

The first time we tried to nurse was in the hospital the day before he came home. He latched immediately and ate like a champ! To say I was overjoyed would be an understatement.

When he came home we slowly eased over to nursing. It took a lot more energy than just sucking a bottle and made him very tired very quickly. Making sure he was getting enough milk felt as important as ever.

After a visit to the lactation consultant, who was super helpful, it took us about 3 weeks to completely transition to exclusively breastfeeding and we are still going strong.

With all that said, it is so worth it and incredibly rewarding when you reach your goal. My best advice is to believe in yourself. You can do this.

My second is to educate yourself and use your resources. Really research, take any classes your area offers, and use your lactation consultants! Without those lovely ladies, I would not have been nearly as successful with both of my children.

Looking back, my two journeys so far have been so different from each other and so eye-opening. Women are so strong and really don’t give themselves enough credit. Keep it up fellow mamas- you have got this. 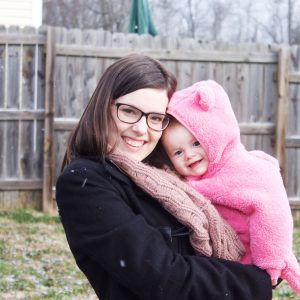 Rachel is a Dr. Pepper loving mama of 2 little ones. Her blog, This Crafty Home, is a place where you can find tips on things like parenting, budgeting/frugal living, and DIY! She loves supporting moms of all kinds wherever their journey takes them.